Acclaim Contracts Ltd are delighted to partner with leading British GT racing outfit Fox Motorsport for the 2020 racing season, placing a focus on youth development during the year. Teenage talents Liam McNeilly and Gordie Mutch will both benefit from the Wickford-based organisation’s support in their respective championships. Each will carry the company’s branding on their racing cars and overalls, aiming to inspire Acclaim’s young trainees to achieve excellence in the roofing trade.
Talent Focus

Gordie Mutch, who lives in Lockerbie, Scotland, enters the Ginetta GT5 Challenge as one of the title favourites, despite being only 18 himself.

Aged just 14, Liam McNeilly is the youngest member of the Fox team and steps up from karting into car racing in the Michelin Ginetta Junior challenge. 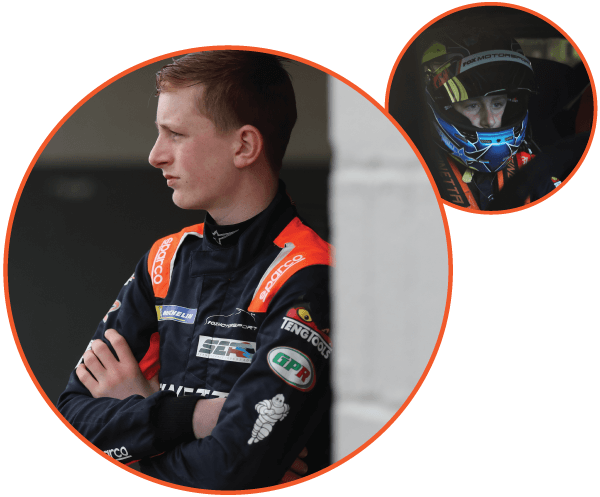 Aged just 14, Liam McNeilly is the youngest member of the Fox team and steps up from karting into car racing in the Michelin Ginetta Junior challenge.

The Brentford racer began karting aged eight, but has relentlessly pushed himself to compete in the most-demanding environment possible throughout his junior career.

A member of the Zip Factory Team – just as Lewis Hamilton was at a similar age – in the Superone British Karting Championship Honda Cadet class, Liam moved through the ranks quickly and scored podium finishes in the IAME Benelux Championship in both the Mini X30 and Junior X30 classes in 2017 and ’18. 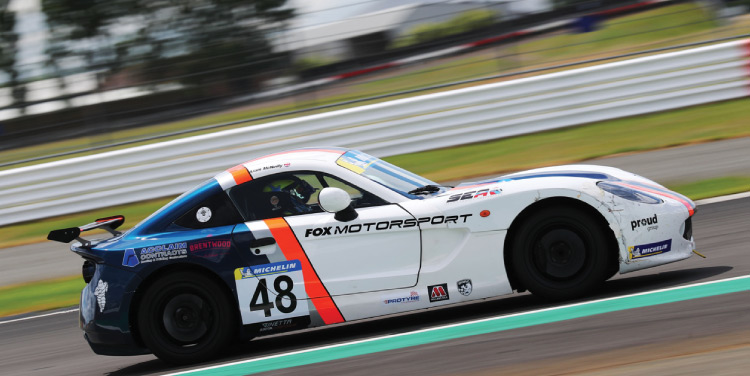 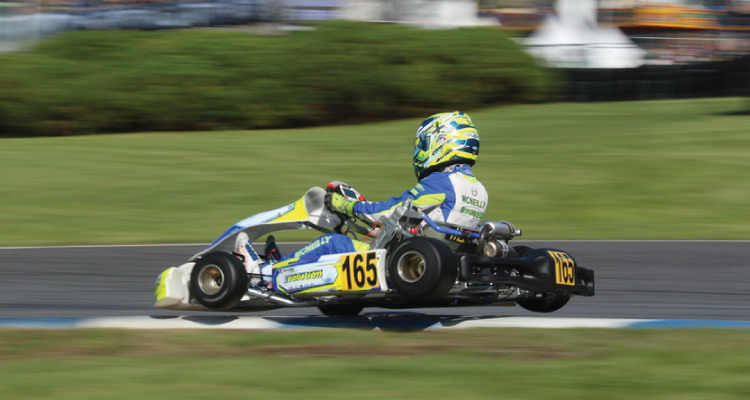 Last year was his most-impressive year to date as he finished fourth overall in the Benelux series and showed strong progress in the European Championship, while also contesting the FIA World Championship in Finland in the OKJ class.

Ginetta Juniors – in which current McLaren Formula 1 racer Lando Norris made his car racing debut – comprises eight rounds in 2020, each in support of the UK’s most popular series, the British Touring Car Championship.With every round broadcast live on ITV4 to an audience of over 800,000, last year’s events each attracting a trackside attendance of over 30,000, the spotlight will be firmly on the young talents, with Liam attempting to outshine his fellow rookie competitors. 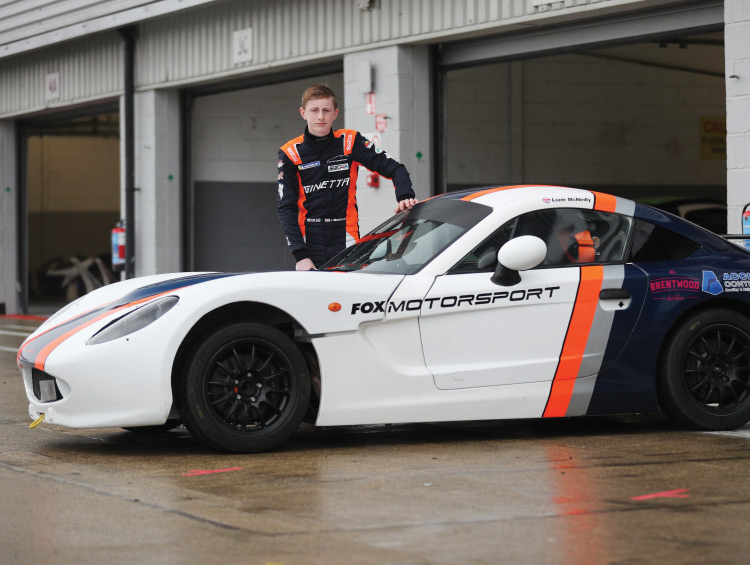 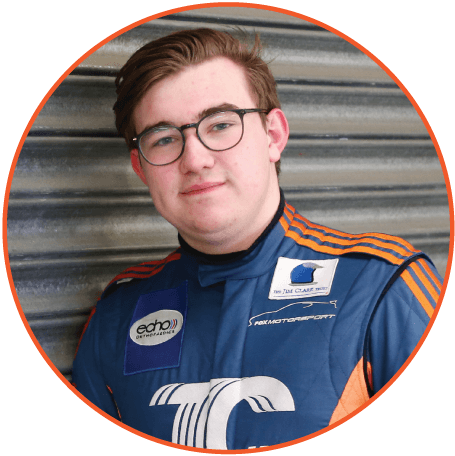 Gordie Mutch, who lives in Lockerbie, Scotland, enters the Ginetta GT5 Challenge as one of the title favourites, despite being only 18 himself. A successful karter in his homeland, Gordie stepped up to car racing in the Junior Saloon Car Championship in 2017 and won his debut race.

After his season was unfortunately cut short, he showed immense determination and resilience to win the Fox Motorsport Scholarship later the same year. This led to a rookie race victory at the Ginetta Junior Winter Series at Brands Hatch.

For 2018 he stepped up to the GT5 Challenge, which uses an upgraded version of the Junior Ginetta with slick tyres, more power and advanced aerodynamics, and recorded his first podium finish at the final race of the season with Maldon-based Fox. 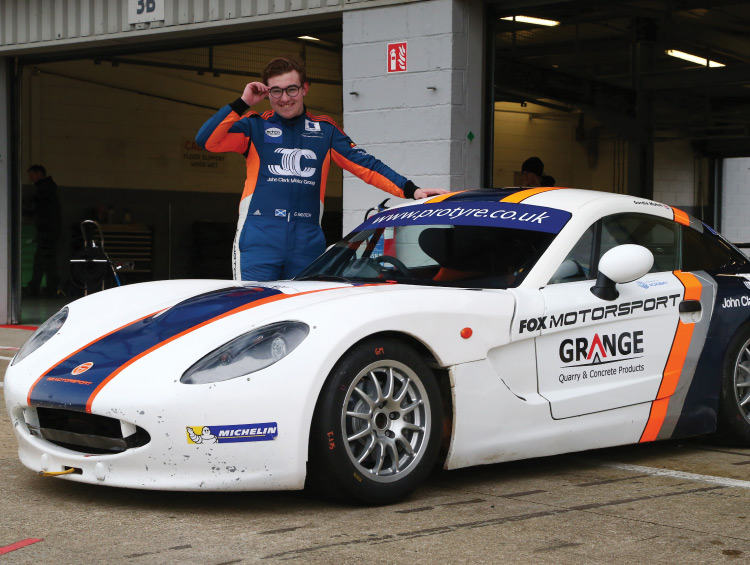 Gordie’s progress continued last year with three race wins and third place in the standings; the Scot taking the title fight down to the final round. Three GT5 rounds will form part of the BTCC package with the rest in support of the British GT Championship. 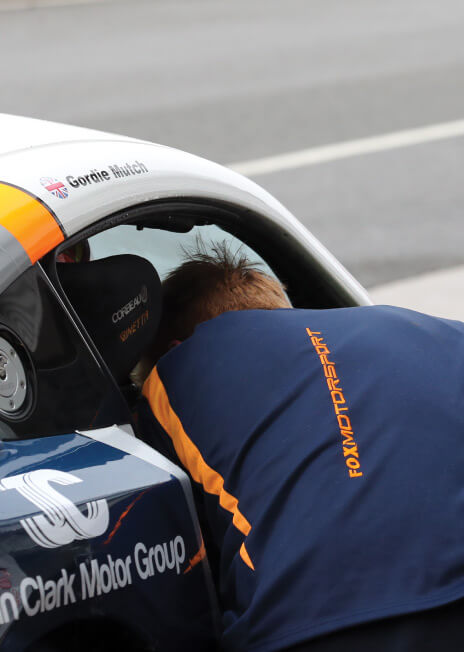 “At Acclaim, we’re putting a big focus on supporting young talent this year,” says Director Ian Duggan, who will race as Gordie’s team-mate in the GT5 Challenge this year.”

“We have a strong tradition of helping young tradesmen find their place in the building industry and right now have a number of roofing apprentices going through their training courses at college.”

“If we help them develop their skills at this early stage of their careers, they can become a real asset to the industry far earlier, and that benefits everybody we work with.”

“For this reason, it make perfect sense to enter this partnership with Fox Motorsport with the two
youngest members of their race team.”

“In Liam and Gordie we are supporting two super young talents, who will carry the Acclaim branding on their cars and overalls throughout the 2020 season and who I expect to see challenging for top positions.”

“Additionally, live television coverage on ITV4 on racedays for both Liam and Gordie will help to introduce Acclaim and the possibilities that are open to young people in a variety of building trades, to new audiences.”