A triumphant Fox Motorsport score a landmark result at the opening Ginetta Junior Championship event of 2021.

Embarking on his second season in the series, the 15-year-old from Brentwood got off to a confident start after setting top-five times at some of the most recent pre-season tests but was unable to find an effective slipstreaming partner during qualifying.  Thruxton’s 2.5 miles of asphalt largely consisting of flat-out blasts and long, fast sweeping bends, the lack of a tow cost Liam over a second on-track and left him 16th on the grid.

With his driving skills artfully on display, he ripped through the mid-pack in Race One to climb to 10th at the finish; repeated moves into the ultra-quick Noble corner proving most impressive as he spent large chunks of time center-stage in ITV4’s live coverage. Later in the day, he was on course for a career-best sixth place, when three rivals slipstreamed by into the race’s final corner, this was due largely to Liam’s left-wing mirror being bent towards the car, which denied him the ability to see which side he was being attacked from.

Currently based in Birmingham, Oldham-born, new team-mate Maurice Henry learned plenty on his car-racing debut, but the Ginetta Junior Scholarship winner was unable to convert his undoubted potential into points finishes.  The 16-year-old suffered an electrical issue in the damp practice session, costing him useful acclimatisation time ahead of qualifying, which took place in equally dismal conditions. 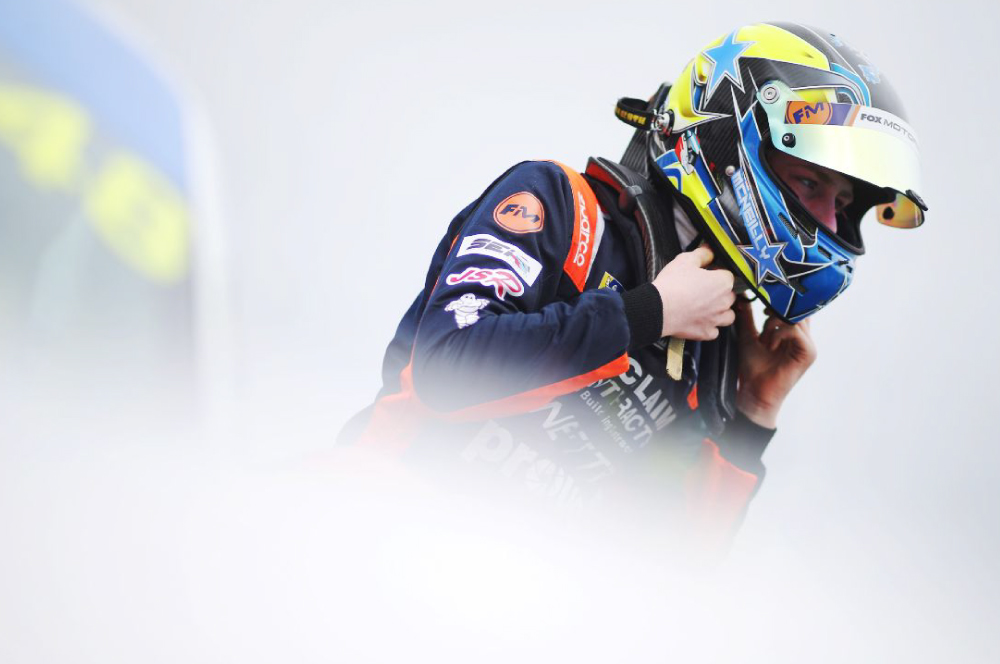 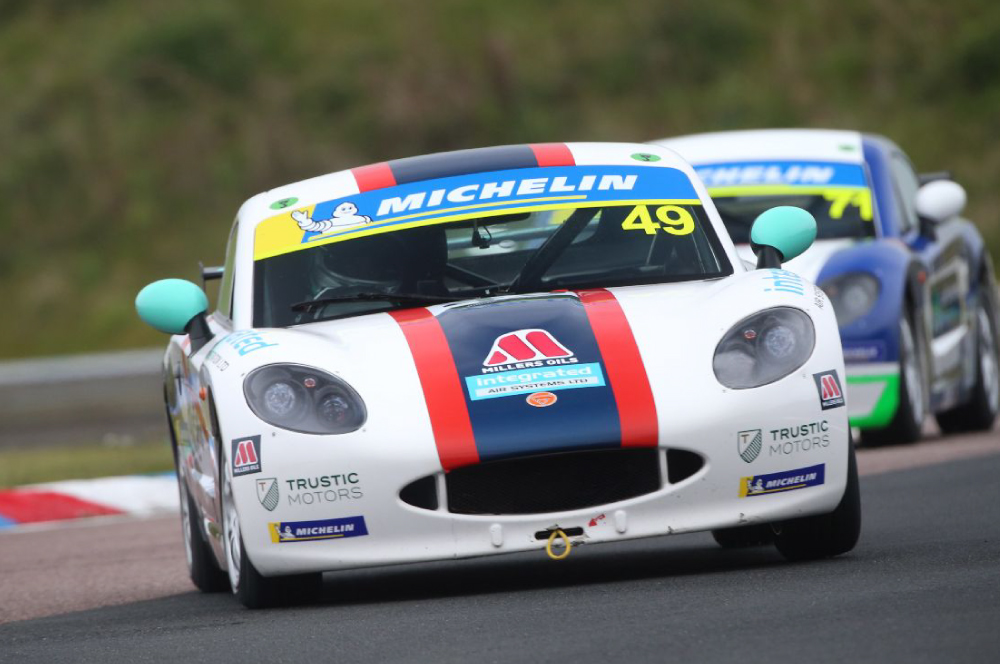 With one round gone, Liam sits 11th in the Drivers’ Championship with Maurice currently 23rd.

“Snetterton, one of my favourite tracks, is next and I know we’ll be even more competitive there.”
Liam said, “I’m really pleased with my results race day and to have set the fastest lap for the first time in Ginetta Juniors is great because it shows that the pace was there to have two very good races. It’s also frustrating because the mistake made in qualifying, not finding a good slipstreaming partner, cost me a good starting position and denied me the opportunity to latch on to the leading pack and fight for the podium each time. I was really pleased with some of the overtaking moves, I thought I had sixth sewn up on the last lap, but my left wing mirror was bent in by that stage so I couldn’t see behind me and three cars that slipstreamed past me, into the chicane.

“My debut event in car racing has definitely been a rollercoaster”
Maurice said,  I’ve learned more at Thruxton than at almost any other event in my racing career. It’s nearly two-and-a-half years since I was last racing on-track with others in karts, so it was good in Race One to go wheel-to-wheel with someone again. Ultimately, I didn’t qualify as high as I’d have liked due to an electrical issue in practice, which robbed us of valuable time before qualifying. We didn’t have the usual Friday pre-race test, if we had, maybe that issue would have shown up and not cost us so much. We were gaining pace every lap and Race Two should have been good, but then the car just stopped. We’ll regroup at Snetterton and try to move forwards.”

“This weekend’s results are massively satisfying”
Paul McNeilly, Team Principal, said, “For all the races and championships we’ve won, Ginetta Juniors is a series we’ve never been able to crack previously, which is why this weekend’s results are massively satisfying. For Liam especially, to set the fastest lap for the first time and show race pace that was better than anyone bar the top three is incredibly encouraging, and to get two top-10 results so convincingly is something that wasn’t possible on a regular basis last year. To say I’m disappointed not to get even more out of today shows how far we’ve come in one year, the level of expectation has changed. Maurice was put in at the deep end for his first race weekend, but he adapted well to the challenge and I’m sure he’ll be even stronger at Snetterton.” 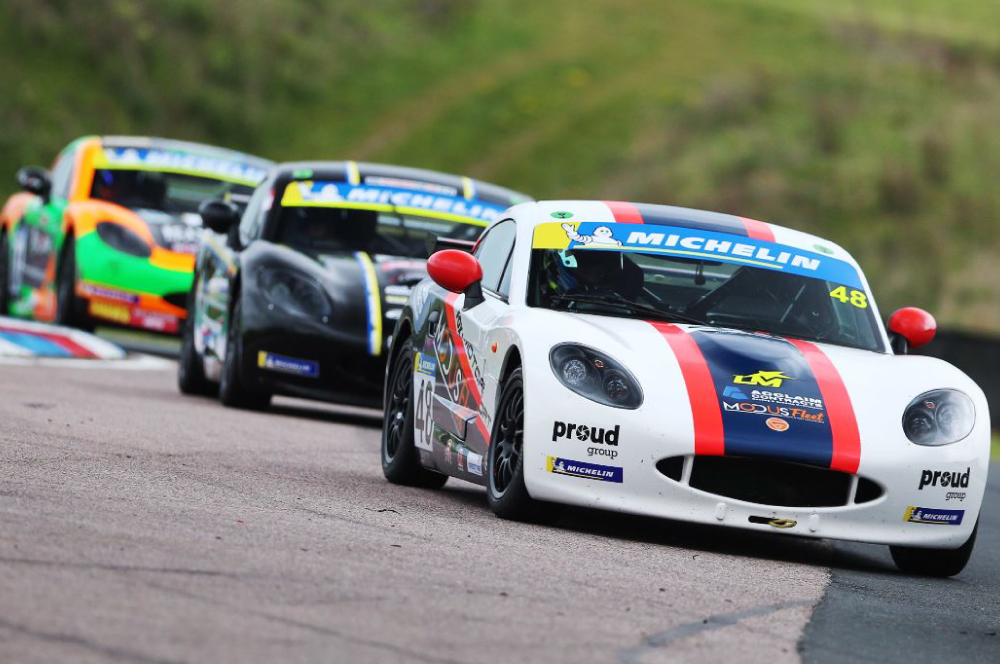 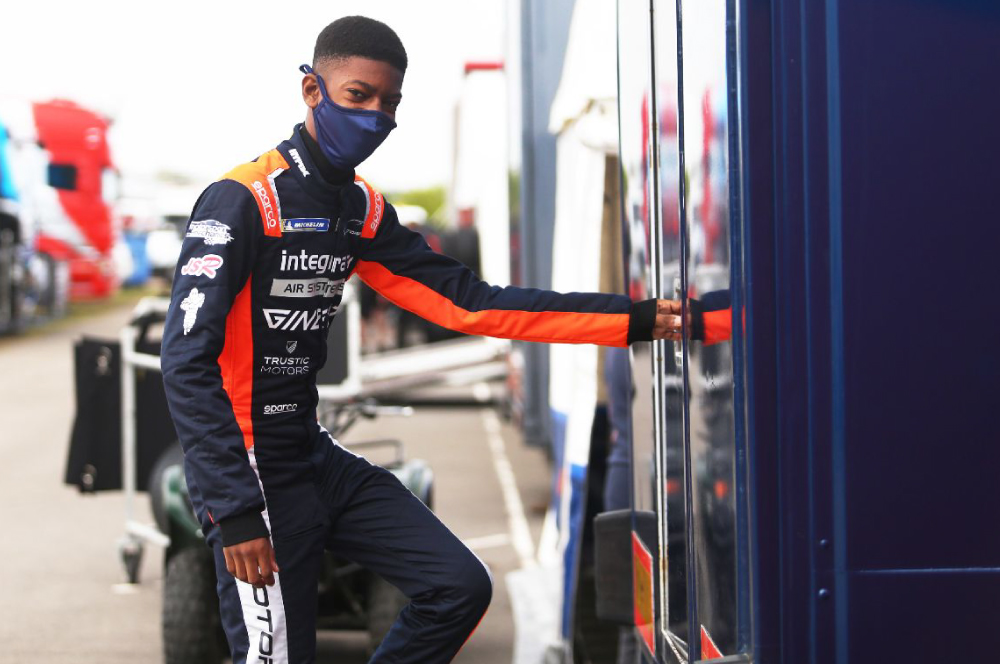 With a strong tradition of supporting young talent, Acclaim Contracts roofing specialists are proud sponsors of Fox Motorsport and look forward to seeing Liam McNeilly and Maurice Henry continue to challenge for top positions throughout the racing season.